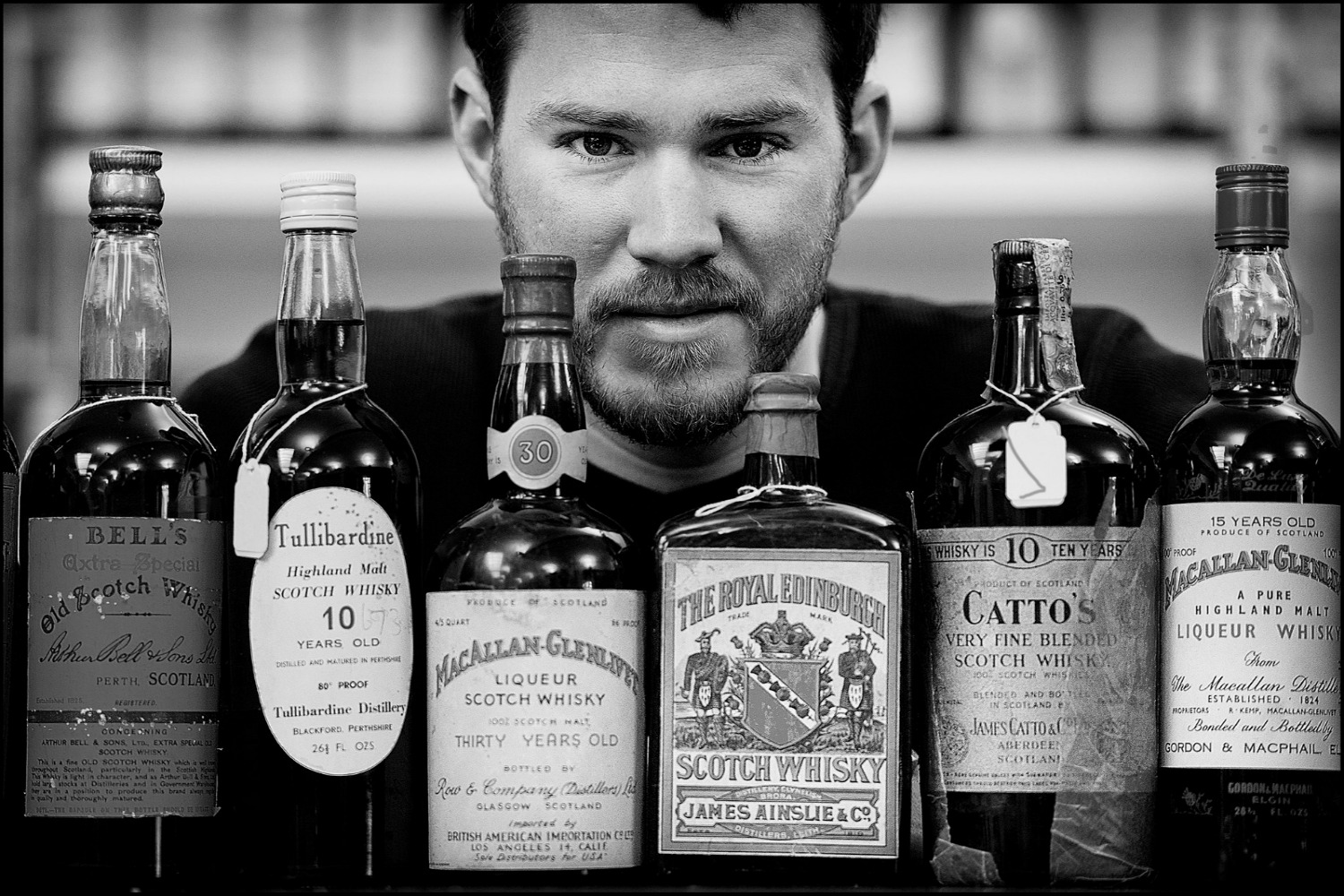 Hi Angus, please introduce yourself to our readers?
My name is Angus MacRaild. I’m a freelance whisky writer and consultant specialising in old and rare whiskies. I live in Leith in Edinburgh. I’m a co-organiser of the Whisky Show Old & Rare in Glasgow and a contributor to Whiskyfun.

When did you discover your passion for whisky?
When I was very young, probably around 3 or 4, we moved from Peebles in Scotland to near Huntingdon in England. I missed Scotland as a kid growing up so I was interesting in all things Scottish. The music, the food and – from quite early on – the whisky as well. I remember my Dad would have a bottle of whisky in the house every now and then and one of his favourites was Laphroaig. When I was around 4 or 5 he let me have a small taste of some Laphroaig and I remember really liking it, being really fascinated by the flavours. From then on I was always interested and would read the backs of bottles whenever one was around. Later on when I was a teenager I started properly reading books about it and started to become more knowledgable.

Our readers in Sweden may recognise you from whiskyfun.com, scotchwhisky.com but where can we find your writing on other places?
I write some longer format pieces for Distilled Magazine in Canada, some occasional bits for Whisky Magazine France and also regularly now for Unfiltered, the in-house magazine of the SMWS. I do a little writing for The Whisky Lounge blog as well and various other places. A lot of my work is also copy writing, I’ll write various things for websites like the Whiskypedia pages of scotchwhisky.com.

What is your opinion on chill filtration and the adding of e-150 in whisky?
I’m of the opinion that e-150 should be banned for single malts in Scotland. I suspect in very tiny amounts it isn’t too noticeable. But in many whiskies I think you can feel it has a negative impact and I think it would make Scottish malt whiskies a bit more prestigious to know that absolutely no artificial ingredients have, or can, be added. I’m less concerned about it for blended whiskies as these are so often drunk over ice, or mixed; they’re a different type of drink in many ways. However, I don’t suspect the law will change in this way any time soon. As for chill filtration, I don’t think it is as important a factor as caramel colouring. I think it has a more detrimental effect on some whiskies than others depending on their character. More full bodied, oily, peaty whiskies suffer more obviously from it I feel. However, the technology behind it is good these days and I think its possible to bottle even at 40% or 43% without excessively detrimental filltration. However, the real issue it highlights for me is bottling strength. If more companies chose to bottle their malts at 46% then no filltration would be necessary at all. I’d love to see Laphroaig 10 at 46%.

You did a brilliant article on the topic on age and flavour for thewhiskylounge.com (hittas HÄR)
What do you think is the biggest problem with the trend of NAS-whisky?
I think there is probably a lot of hyperbole around the whole NAS debate and that it has become kind of the monster that won’t die. I have no problem in principle with NAS whiskies, there are plenty good ones. I just feel that they are so rarely superior to properly aged examples. It’s when companies try to use the NAS as a means to hide behind and sell younger, often inferior stocks, at a higher price. And, lets not kid ourselves, many NAS whiskies nowadays, such as those you find a lot in Travel Retail, are often quite boring. For me information about what I’m drinking forms a large part of the pleasure of a whisky.

Can you give us some examples of what you consider to be good NAS-whisky?
Longrow Peated. Bruichladdich Classic. Bowmore Small Batch. I tried the Highland Park Hobbister recently which I thought was an excellent whisky and a rare example of a slightly more expensive NAS whisky I felt was really worth it. Also Aberlour A’bunadh. I used to love Ardbeg Uigeadial as well but I feel it really lost something in recent batches. Glendronach Cask Strength is also pretty excellent I think.

Some of us know this, but you are the man behind The Whisky Sponge. How has the reaction been from the industry regarding the sponge?
My impression is that most people in the industry enjoy it. I think most people are able to see it for what it is: a laugh and a fun way to let off a little steam about the sillier aspects of the whisky world. Apart from Macallan and some people at Edrington, I don’t think they like it, I think they even had a meeting about it. But generally I’ve only had good feedback from it. After all, it’s not often unkind so much as surreal, ridiculous and total nonsense.

Is the sponge still alive and kicking?
Yes, although it is more alive and on holiday at the moment. Not on purpose but I’ve had a pretty crazy year and been so busy with other projects the Sponge has become kind of neglected recently. Hopefully in the next month or so I’ll be able to re-dedicate a little more time to it.

Many people say that whisky was better in the 50’s, 60’s and the 70`s. From your experience, do you agree and if so why?
Yes, I do generally agree. It isn’t to say that there aren’t good whiskies being made nowadays, there certainly are. But I feel production techniques in the early 1970s and before tended to produce more characterful single malts that had more distillery identity. The result of more localised maltings, more use of peat, slower mashing and fermenting processes using gentler brewers yeasts, direct fired stills, worm tubs and less of a reliance on very active wood all combined to make more distillate driven, characterful malts. And in turn the blends tended to have more muscle and fullness of character as a result. I think the over-reliance on first fill bourbon casks in particular in today’s industry coupled with a higher drive for efficiency and spirit yield has led to a large degree of homogenisation. Especially on mainland distilleries. Which is a shame when you taste modern bottlings against their older counterparts. However, it was almost inevitable with a product such as whisky when the commercial pressure of a booming industry was brought to bear upon the production process.

New whisky distilleries are being built all over the world at the moment. Of the so called new world whiskies give us the top five you have tried?
In no particular order: Smogen. Balcones. Notch Single Malt from Triple 8 Distillery in Nantucket. Chichibu (not sure that counts as ‘new world’ anymore). Lark from Tasmania.

Tell us about some whiskies that has left some lasting impressions on you, good or bad?
Well I recently was lucky enough to try some very old Highland Park 12 and 10 year old bottlings from the 1940s and 1950s on Orkney. The peat flavour was incredible, totally different from almost anything else I’d ever tasted and an amazing example of how peat from different locations can give a unique geographical flavour. Later in the same week we also opened a bottle of Laphroaig 14 year old bottled for America in 1953. This was also an incredible dram but with a different peat profile again and so different to almost any other Laphroaig I’ve tasted. One of the greatest whisky experiences of my life. As for some bad lasting impressions… the worst whisky I ever tasted was an old bottle from the shipwreck of the Wallachia. We opened it on Loch Ness in 2014 and I can tell you it was probably the worst thing I’ve ever put in my mouth. The rest of the bottle went into Loch Ness and, if there was a monster in there before, it’s definitely dead now.

Do you have any whiskyadvice to our readers?
Enjoy you whisky. Try to spend a little more on a few really good whiskies that you love than more mediocre ones for the sake of it. Try to drink your best whiskies with the friends you love, with people who share a philosophy of whisky with you. Don’t always listen to the mainstream industry but don’t always just rubbish them either. Be respectful of others and don’t ever let the love of whisky get on top of you, at the end of the day it’s just a drink.

Anything you wold like to add?
I would hope to see as many of you as possible at the Old & Rare Whisky Show 2018 or other festivals around Europe in the near future. Without whisky lovers I don’t really have a job so thanks to anyone that’s ever read anything I’ve written or bought a dram from me at a festival. Slante!