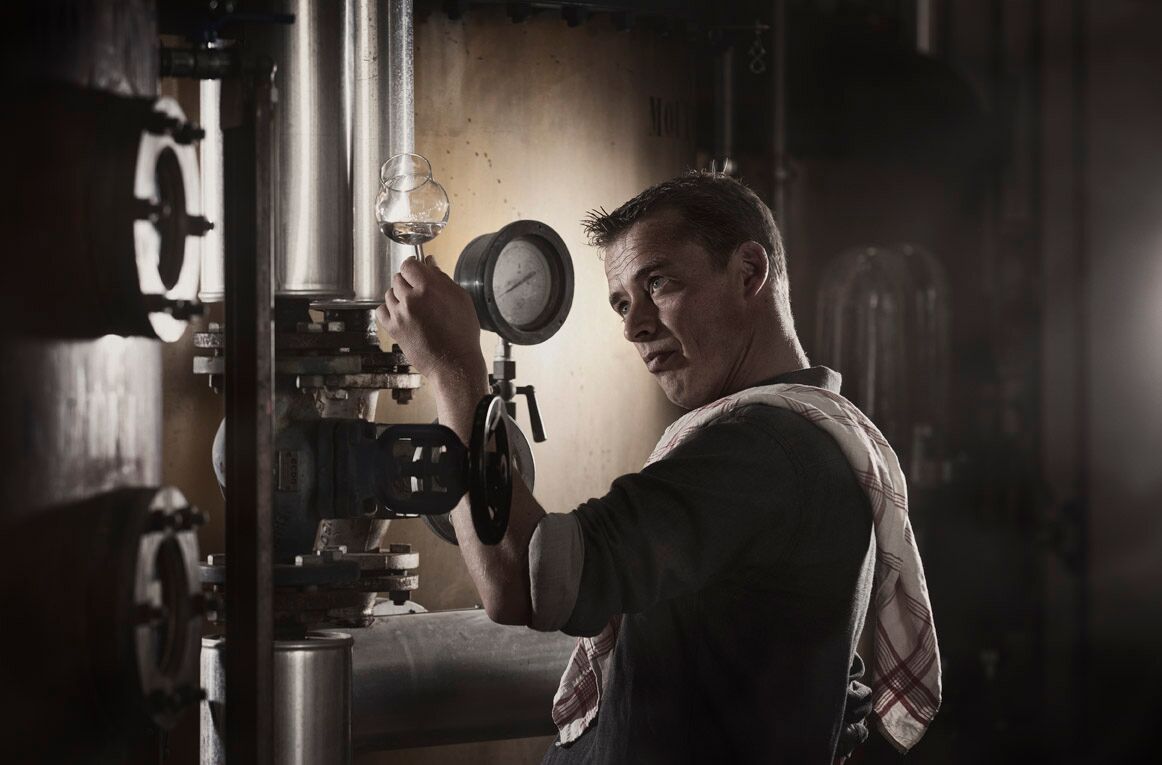 Hi, please introduce yourself to our readers?
Pedro Saez del Burgo has been working at Filliers Distillery for more than 20 years and learnt all the tricks of the trade from Jan Filliers (5th generation master distiller) before becoming a master distiller himself.

Filliers distillery is not very known here in Sweden so please tell us about it?
On the banks of the Leie River in picturesque Bachte-Maria-Leerne in Belgium, tucked away among rolling meadows and grain fields, Filliers Distillery has been creating premium spirits such as grain genevers, fruit genevers, gin, whiskey and vodka since 1880. The artisanal distillery process at Filliers makes use of traditional copper alembic stills (pot stills), and is a delicate balancing act that relies on the craftsmanship and many years of experience of five generations of Master Distillers. Filliers distils and “cuts” according to carefully guarded family secrets, passed directly from founder Karel Lodewijk Filliers to the next four generations of Master Distillers, to arrive at the most exquisite distilled beverages.
In 1880, Karel Lodewijk Filliers – great-grandfather of the current generation – was issued a license to set up his “genever roastery” in Bachte-Maria-Leene in replacement of the former agricultural distillery which was lost to fire in 1863. In the course of many years, Karel Lodewijk continued to refine his recipe until, ultimately, an artisanal Grain Genever of the very highest quality trickled from his stills. Up to this very day, Filliers Distillery distils its spirits in the exact same manner it always has, with the entire process from grain processing to bottling taking place in-house.
However, the next generations have not been resting on their laurels. Firmin Filliers developed a gin with Belgian hops in 1928, which has recently been reintroduced to the market as Filliers Dry Gin 28. The development of this gin was an obvious choice, as gin is a direct descendant of genever. Additional product innovations such as whiskey, eggnog and fruit genever followed, with respect for the craft always the primary concern.

What kind of stills do you use at Filliers?
We have 15 different types of distillation stills, with contents ranging from 300 to 8000L, which we can use to exibly distil in a variety of different ways. We also have 2 washstills & 5 fermentation kettles. For the whisky we do the first distillation in a Colum still. The second distillation we do in a pot still .

We have seen som single grain whisky here in Sweden from Filliers. Will there be any single malt as well?
We’re currently aging Malt whisky at the distillery, which we will release once we’re pleased with the quality/taste, which we are closely monitoring.

How would you describe the house style of Filliers?
We try to do everything the traditional way, no short cuts ever. We have a strong genever heritage and we approach other spirits through this heritage. This is why we started with single grain whisky for example, because jenever is also a blend of grains.

Your whisky has the name Goldlys and not Filliers, why is that and where does the name Goldlys come from?
For us, the name Filliers is permanently linked to genever. That’s why chose a new name. The name comes from the nickname for the River Lys – ‘Golden River’ on whose banks the warehouses stand. In the past the river was a gold colour because of the presence of rotting flax in the water.

What kind of other spirits do you distill at Filliers?
As mentioned before we have a long history of genever, we first started with gin in 1928 (Filliers Dry Gin 28), next to that we also make some liqueurs, fruit genevers, whisky and vodka.

New distilleries are popping up all over the world now. Of the so called new world whiskies what is your favorite?
I do appreciate the Japanese Single malts, especially the Yoichi single malt is suburb.

How does the whiskydrinker in Belgium like his (or her) whisky?
We have always had a very solid base of whisky drinkers in Belgium that are always on the lookout for limited Editions, special bottlings, new whiskies… In the last couple of years we see that they dare to go wider than single malt and the traditional whisky countries

Have you tried any Swedish whisky, if so what did you think of it?
We only know Mackmyra, we especially like that they’re trying to find their own way/image and not necessarily try to copy Scottish whisky.

Do you have any whiskyadvice to our readers?
Although whiskies with many medals, old age claims and very high prices can be nice, don’t get carried away by them. Taste is something very personal so keep your whisky choice personal and drink your whisky the way you want to.