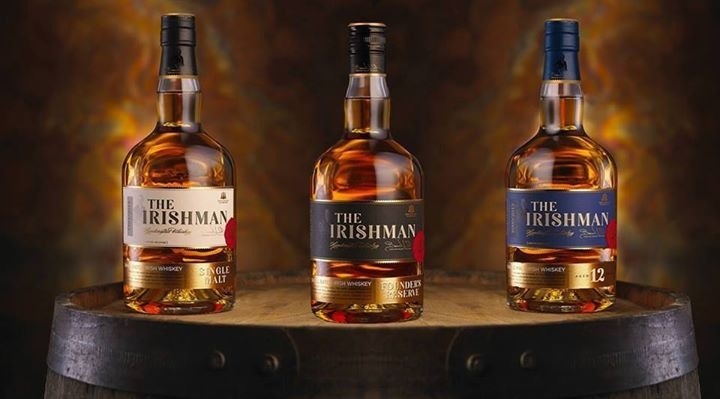 Please introduce yourself and the Walsh Whiskey Distillery.
Hi I am Woody from Walsh Whiskey Distillery and my role here is Brand Relationship Manager.  It is a varied role as we progress in an amazing world of whiskey that is ever growing.  Walsh Whiskey Distillery was Established in 1999 by husband and wife, Bernard and Rosemary Walsh, and located on the 18th century Royal Oak estate in Ireland’s County Carlow, the Walsh Whiskey Distillery Company is a leading independent producer of super-premium and ultra-premium, triple-distilled, craft, Irish whiskeys.
Set deep in the heart of barley-growing country, directly over the Barrow Valley Aquifer and framed by two hundred year old mighty oaks on the banks of the River Barrow, Royal Oak is the perfect place for creating exceptional quality whiskeys.
Led by founder Bernard Walsh, and with a strong board of industry veterans, the company has built a portfolio of international award winning drinks brands. These include a range of six Irish whiskies under The Irishman and Writerṣ Tears brands, the Hot Irishman Irish coffee and The Irishman Irish Cream liqueur. Demand for the critically acclaimed The Irishman and Writerṣ Tears brands currently exceeds available supply in the 45 countries they are distributed to worldwide.

The Walsh Whiskey Distillery has grown a lot since the start. How big is the capacity you have now?
The distillery at Royal Oak was commissioned on 27 March and is one of the largest independent whiskey distilleries in Ireland. The two production lines, using both pot stills and column stills, give Walsh Whiskey Distillery the capacity to produce 650,000 cases (two and a half million litres of pure alcohol (LPA’s) or 8 million bottles) of whiskey annually. The expansion of the business will lead to increased supplies of Irishman Whiskey and Writers Tears brands from 2019 when distribution will increase to over 100 countries including China and India.

Could you guide us through the following whiskeys from your range?
The Irishman Founder’s Reserve:
The Founder’s Reserve is a unique take on the old Irish Pot Still Whiskey and is the original and signature blend created by founder Bernard Walsh.  It is a blend of two styles, Single Malt and Single Pot Still. The proportions used are 70% Single Malt and 30% Single Pot Still. This is unusual in itself, as it is the only Irish blended whiskey to contain 100% whiskey distillates from the copper pot still and 0% Grain or Column still whiskey. This results in a much more flavoursome whiskey. The Founder’s Reserve is triple distilled and matured in Bourbon Casks.  A Gold Medal Winner at The International Spirits Challenge in London, one of the highest rated Irish Whiskey’s in Jim Murray’s Whiskey Bible with 93 points – “Quite a Wonderful Blend” and most recently awarded Gold at “The Whiskey Masters 2010” as overall winner in “The Irish Whiskey Category”.  Quite simply an amazing Whiskey!

The Irishman 12 YO:
At The Irishman we pride ourselves in continually raising the bar on the quality of Irish Whiskeys released, as well as offering something new and excitingly different.  With The Irishman 12 year old Single Malt we certainly feel we have delivered on this promise. This outstanding whiskey is the outcome of 12 years maturation in exclusively first fill Bourbon casks.   The Irishman 12 Year Old Single Malt is a timeless Irish Malt which is matured in first fill, flame charred Bourbon barrels.  Each year we will select only a handful of the best barrels, to make ‘the cut’ for our 12 Year Old.  A maximum of 6000 bottles will be produced each year.  Each bottle comes numbered by batch as a mark of quality and is non-chill filtered.

Writer’s Tears:
“Writerṣ Tears” is a unique old Irish Pot still Whiskey. It is a vatting of Single Malt and Single Pot Still whiskeys. Distilled from 60% malt and 40% pot Still (No Grain). Writers Tears is triple distilled, non -peated and matured and aged in American Oak bourbon casks. A gold Medal winner at the International Spirits Challenge in London and one of the highest rated Irish Whiskeys in Jim Murrays Iconic “Whiskey Bible” “Altogether a very unusual Irish Whiskey , a throwback to the last century where spiced Pure Pot Still whiskey was married with Floral Single Malt” –Jim Murray . It has also been added to Ian Buxton’s publication “101 Whiskeys to try before you die”

The Irish whiskeyindustry is blooming at the moment. What are your thoughts on that?
We have been in the industry since 1999 where Irish whiskey sales in the previous five ears had seen growth, but nothing spectacular.  However I have never experienced such demand as we have today. The Irishman is currently exported across 36 countries and our focus for the coming 12 months is on growing our key existing territories. Due to the phenomenal demand of our brand “Writers Tears” we have it on allocation and made it available in only select markets. I continually hear about this near overnight success that is “Irish Whiskey”, but you only have to look at the data to see that Irish whiskey has been growing for over 20 consecutive years. The last 10 have been phenomenal with the compound annual growth rate (CAGR) of 9% per annum. It not only is the fastest growing whiskey category but the fastest growing brown spirit.  The roots of the renaissance have been established over the years, Irish whiskey is a drink of the younger generations the millennials. It’s approachable and mix’s really well. In many cases it is seen as closer to bourbon than to Scotch… its sweetness, spicy notes and mixologists love it. The great thing about Irish whiskey is that 95% of what we as a category produce is for export. And 98% of Irish whiskey is brand-driven; there’s little or no private label left in the business. Brands grow categories and this is very important. By 2020, we hope to double our 2014 exports, from 6.7m cases to around 12m cases. We hope to double that again by 2030 to 24m cases. Will we be a big, dominant player? No. The Scotch category exports around 90m cases – so, we know where we are. But, we’d like to grow our global whisk(e)y market share, from the current 4% to 12%. For us, that would be a success and would mark a renaissance for Irish whiskey.

What would you say are the difference between Irish Whiskey and Scottish whisky, beside the spelling?
Irish whiskey is famous for its Triple Distillation which makes it more approachable in flavour also giving more citrus and spice flavour.  Scotland are more known for its double distillation and more robust flavour.  Scottish whiskey is also known for peating their whiskey which gives a smoky flavour which is done by malting their barley with a smoke fuel.
One of the main differences is our Pot Still Whiskey which is a specific type of whiskey that we make only in Ireland.

Could you describe the Irish pot still style of whiskey?
Pot Still whiskey is made similar to Single Malt except that the mash at the beginning, before we go through the same process of distillation, is a combination of Malted Barley (germinated) and Unmalted Barley (non-germinated).  What this can offer is a beautiful oily texture with subtle spicy notes.

What are your top five whiskeys or whiskys beside your own?
Well closer to home, you can’t pass fantastic pot still whiskey such as Green Spot and Yellow spot but further afield I have to say I enjoy the likes of BenRiach, Aberlour & Bowmore.

Have you tried any Swedish whisky? If so, what did you think of it?
I have tried a fantastic brand named Macmyra.  It was at a whiskey show in Norway and enjoyed how balanced it was and its smooth taste yet offering complexity in flavour.

What are the plans for the next year for the Walsh whiskey Distillery? Anything you can reveal for our readers?
There are many plans for Walsh Whiskey in the coming year and one thing that I can reveal and stand behind is that, as with all our whiskeys to date, we will produce the finest quality from our home in Royal Oak.  Also we will endeavour to reach our commitment to offer a whiskey experience at Royal Oak that will have you come time and time again.

Do you have any whiskeyadvice to our readers?
To those that have not tried Irish Whiskey I would say come and savour The Irishman & Writers Tears Range, you will not be sorry.  To those that have started their journey with Irish whiskey I say, continue to enjoy our golden nectar.

Finally: Anything you would like to add?
Just that once open for visitors we will enjoy meeting with all our Irishman & Writers Tears fans as we lead them into a personal feel of Walsh Whiskey Distillery.