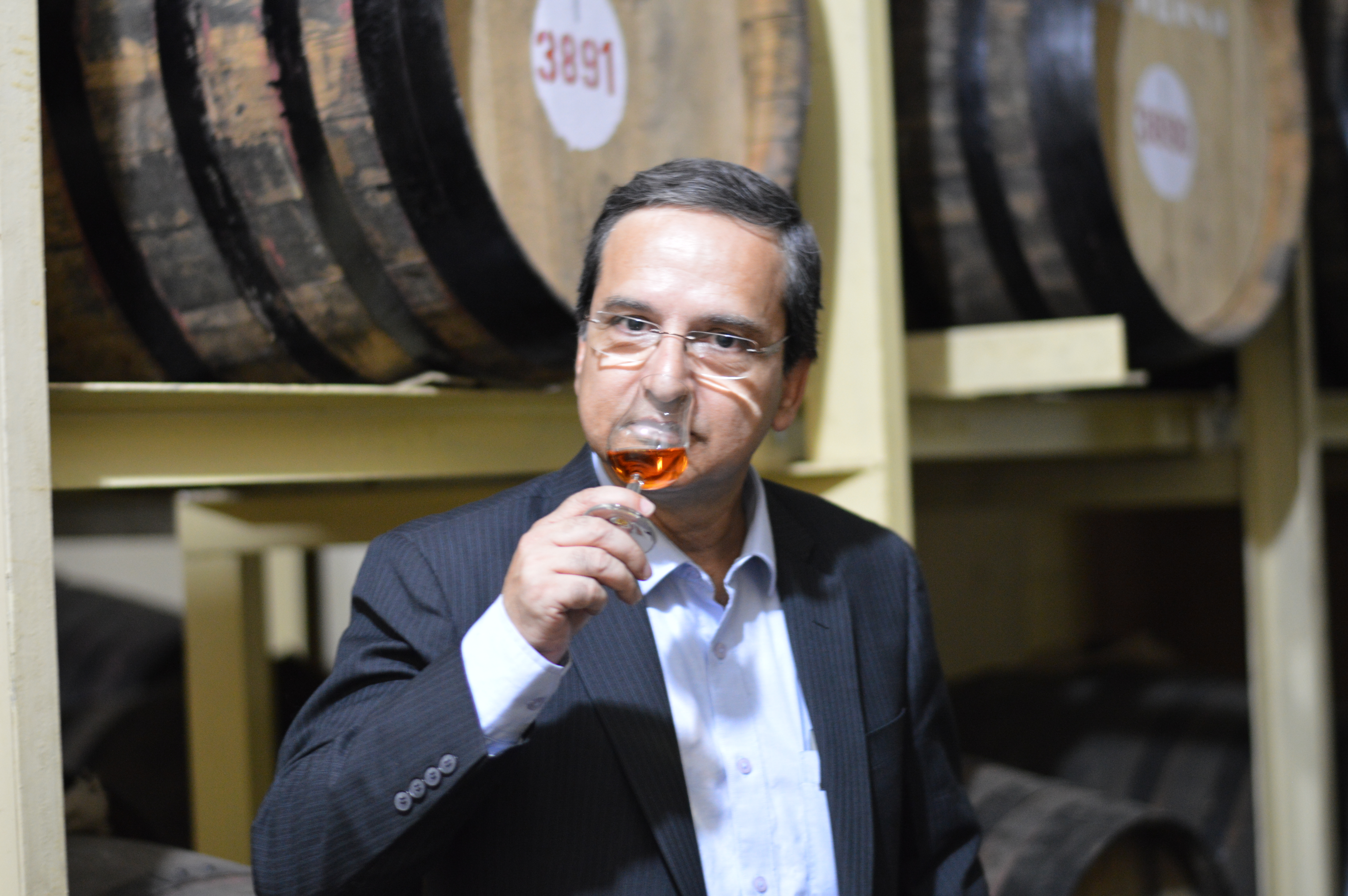 Hi, please introduce yourself to our readers?
My name is Surrinder Kumar Sr. Vice President( Operations )& Master Distiller / Blender in Amrut Distilleries Pvt. Ltd, Bangalore, India. I have been in the Distilling industry for the last 33 years.

How did you first got involved in the whiskyindustry?
I have done Masters in Food Technology from CFTRI (Central Food Technological Research Institute, Mysore, India), one of the best Premium Institutes in South East Asia. I was picked up in the Campus Selection by the Distillery & started my long journey in this sector.

How would you describe the house-style of Amrut?
The House style of Amrut is basically clean, Sweetish, soft, floral, chocolatey, subtle spiciness ,with fruity overtones & the complexity incorporated by the innovative methods followed in the Maturation.

You sure have some greedy Angels at Amrut. Tell us about them and the maturation of whisky at Amrut?
We keep Angels very happy & satisfied in Amrut. We generally experience 8 to 10% of Angels Share per year like any other tropical country in the world.
We have stacked warehouses upto max. of 8 high rows & have 6 Warehouses accomodating around 5700 barrels of different types & origin. We have almost finished construction of a new large warehouse which will hold another about 5000 barrels on site which shall go into the stream by the time you publish this interview.
We use a mix of Once used Bourbon Barrels, virgin American Oak, European Oak & off course different Sherry Butts to finish our whiskies.
We are contemplating to use a special wood for the very first time for which the order had been placed. It will be a sort of R & D work before we take this project forward in a bigger way. Let us see how the results pan out.
We generally juggle out the Whisky from one to the other wood before we bottle it incorporating the specific character & complexity in the product. We have undertaken sometimes an unconventional route to incorporate a specific profile to the Whisky which had been received very well by our consumers all over the Globe. Typical examples are Amrut Intermediate sherry, Spectrum 004 & the likes of Amrut Narangi. All these expressions have made a mark for the innovative thinking in Maturation process. We at Amrut prefer to go for out of box thinking while designing our new product lines & it has always worked well for us.

You have long fermenting and slow destillation at Amrut. Tell us about that decition and how that impacts the flavour of Amrut?
We have been following deliberately a long fermentation cycle of 5 days at controlled Fermentation temperature around 13 to 14 C. This ensures complete & efficient fermentation & consequently better yields in terms of alcohol & improvements in the flavour development in terms of esters or fruity flavours. We are achieving equal or even better alcohol yields per ton of Barley malt imported from UK compared to the best distilleries of Scotland. This was confirmed to me by the Technical Director of one of the most famous & large Distillery of Scotland recently. I was elated personally by his confession.

Is the process the same for the unpeated and the peated runs?
The processing of both the Peated & unpeated malted barley is the same. We process them separately & the new make spirit is matured in similar kind of barrels
as well, for a specific period of maturation before bottling.

How much do Amrut distill unpeated vs peated whisky?
We have a 70% unpeated & 30% peated runs.

What is your process when you create a new expression from Amrut?
The new development is based on some idea or perception which is debated in the core team in the begining & then the trials,in the pursuit of the achievement towards the goal in mind, are undertaken, analysed, assessed, debated & may be reengineered finally by wee bit of tweeking here & there to suit organolaptically to the best satisfaction of the core team before it is launched in the Mkt.

What are the biggest markets for Amrut?
The biggest Mkts.for Amrut are India as such followed by France, North America, Canada, Australia.We are experiencing a strange situation where our demand has overstretched the Supply. We are compelled not to aggressively go for newer markets untill we prepare ourselves for the higher levels of Production & Maturation facilities which are in place & we are aggressively perusing these actions at the moment to augment the Whisky supplies consequently.

What are your favorites from the Amrut-range?
This is difficult as much as to ask a parent who among the siblings is the most preffered one. For me every Amrut expression is a concept & a story to tell the consumers from the time it is conceived to its fruition rendering its magical impact on the sensory & olfactory faculty of the consumer & bringing a new drinking experience & excitement.

What drams do you choose when you don’t drink Amrut?
There are amazing whiskies available & are worth tasting. I try different whiskies from light to heavier styles, peated & different sherry finished ones. That keeps my grounded with the developments happening in other parts of the world.

Do you have any whiskyadvice to our readers?
There is nothing they should pay a heed to. Enjoy whisky the way they like & don’t get dictated. Enjoy whisky responsibly. Health & safety is prime.

Finally, Anything you would like to add?
We at Amrut want to provide the best to our valued consumers, with the best value for their money because we see a stakeholder in each & everyone of them.