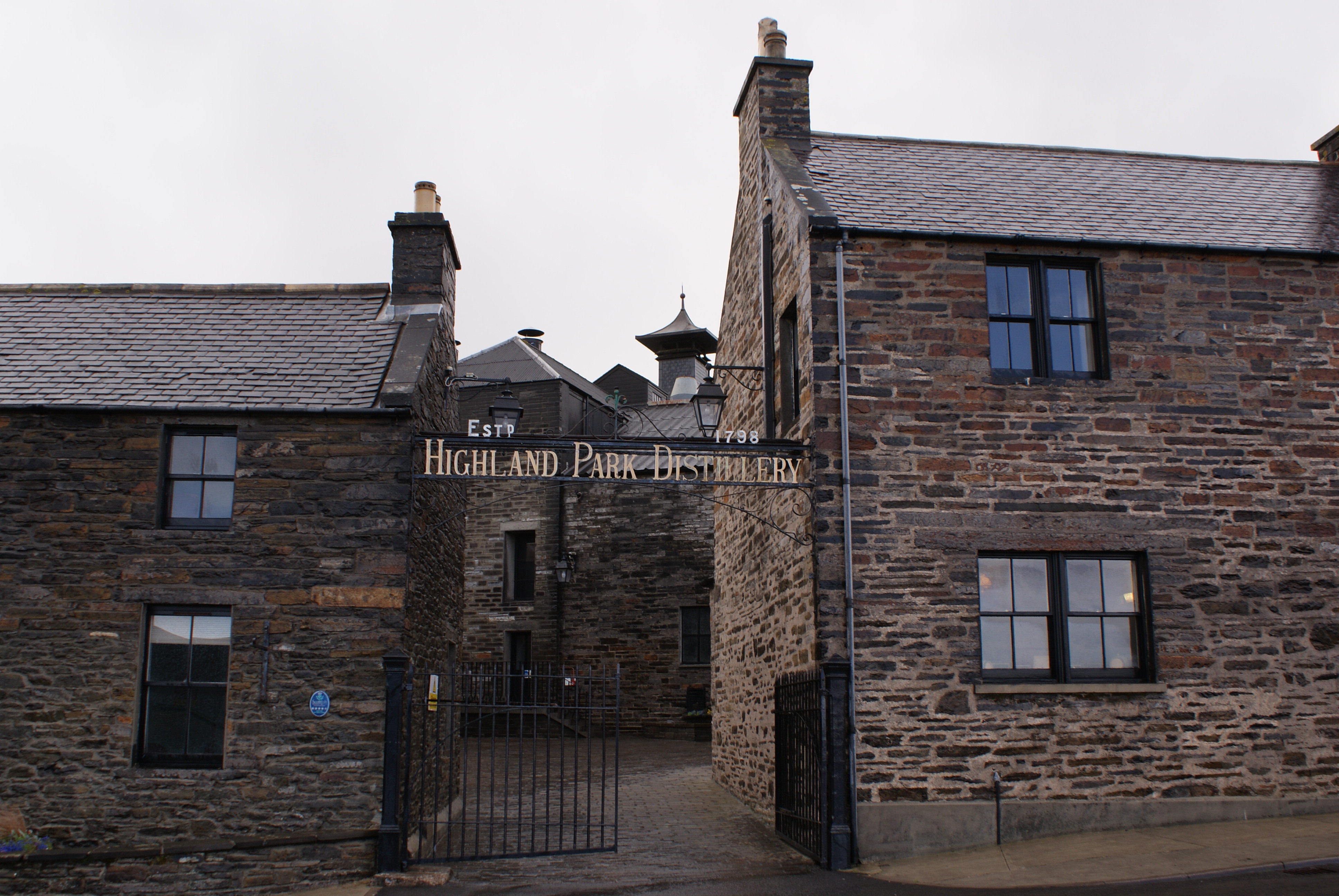 Hi! Please introduce yourself to our readers?
Marie: My name is Marie Stanton, Distillery Manager at Highland Park. Married to husband Dave and 3 kids, Jack, Sophie, and Leah.
I’ve not long been on Orkney, having only moved up from Speyside in October 2015.  Before coming here I worked for William Grant and Sons at The Balvenie and prior to moving to Speyside in 2006 I had worked in cask ale breweries, Timothy Taylors and Shepherd Neame.

Martin: My name is Martin Markvardsen and I am the Senior Brand Ambassador for Highland Park. I have for the last 10 years worked for Edrington Group but been in the industry for almost 26 years.
In 2009 I became a Keeper of the Quaich.

How did you first get involved in the whisky industry?
Marie: My Dad used to take us on holiday and there would always be a brewery or a distillery conveniently close by.  I grew to love the smells of them and so when it was time to go to university the obvious choice for me was the degree in Brewing and Distilling at Heriot-Watt University in Edinburgh

Martin: It all starting after a visit to a distillery, after the tour be one of the warehouse men I was sold and I knew right away, that this was my call. Began to work for free at a few distilleries and learned everything from working in the warehouse to distill and to do the blending…. I am fortune to have had some really good teachers.

How would you describe the house-style of Highland Park?
Marie: Perfectly balanced, with a gentle smoke and sweetness

Martin: Highland Park is a lightly gentle smoky single malt, with some nice sweet honey notes…..we also aim to get a rich fruity notes to every bottling.

How would you explain the difference between your peated whisky and the one from Islay?
Marie: The difference is the peat and the peating regime. There are 4 main peat bogs types in Scotland and they were formed from different plant material thousands of years ago. Each peat type when it is burnt then gives a different range of phenols to the malt. Orkney peat is largely heather root and gives an aromatic gentle smoke

Martin: Well it all comes down to the peat. The peat from Orkney is very different to the peat from Islay. Our peat contains a lot of heather and have no wood. Islay peat do contain heather, but will for most also have trace of wood, seaweed etc. we measure it as Lignin content, and shows us that there’s a huge difference between the Islay and Orkney peat (see below) 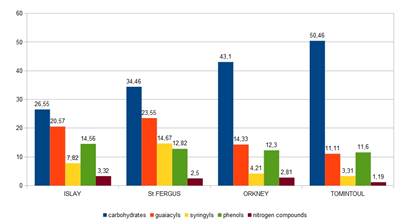 Why did you bottled the HP Cask Strength Edition exclusive for the Swedish Market?
Marie: Sweden is one of the most important markets for Highland Park. Our whole range has been available for several years and our most senior Brand Ambassador – Martin Markvardsen – has been educating consumers all across the country for years. We felt it was important to create something affordable, interesting, limited and special for the Swedish audience. It has proved to be very popular

Martin: Sweden is one of the biggest markets for Highland Park, so when we got a request from SB about a Cask Strength edition and if half size bottles, we gave a try.
We won the tender and seems like we were spot on with flavor and strength. We will always use Sweden as a market for new things. The passion and knowledge in Sweden is bigger than anywhere in the world.

A lot of your bottlings referring to the Vikings and Norse gods. Why?
Marie: The Vikings came from three countries of Scandinavia: Denmark, Norway and Sweden. They sailed to Scotland where they made settlements in the North and on the Orkney and Shetland islands.
The Orkney Islands were owned by King Christian 1 – who ruled Denmark and Norway. They were gifted to Scotland as part of a wedding “dowry” as the king defaulted on a financial agreement in 1468. For 500 years the Islands probably spoke the Norse language and were not Scottish. Vikings and the Norse countries are in our DNA, literally 1 in 3 people in Orkney have Scandinavian DNA in their blood. We celebrate this fact through our bottling’s and marketing

Martin: We like to tell stories and as the Vikings formed Orkney to what it is today, we like the heritage and the good stories that followed. The Vikings from Denmark, Norway and Sweden came to Orkney around year 800 and settled down. These are the stories we want to tell. Even the founder of Highland Park came from a Nordic family, most likely a Swedish one.

Can you tell us why we should visit Highland Park and Orkney Islands?
Marie: The Orkney Islands are amazing and not what most people expect. There is so much to see and something of interest for everyone. There are amazing landscapes, heritage that predates the pyramids, a thriving craft scene and local food and drink that is second to none.
Highland Park itself is well worth seeing as it is one of the very few distilleries around that still maintains a floor maltings all situated around a lovely neat complex of buildings on the edge of Kirkwall.

Martin: Orkney is worth a visit, not only for the 2 distilleries, but also for the beautiful rough islands. There are so many historical sites, so many amazing places. The people on Orkney are extremely friendly, so I actually want everyone to see how great it is. Of course Highland Park is a must to see. Hand turned malt is a rare sight today, we still do it. Lots of great bars….what can I say…..just go there

What is your opinion on chill filtration and the adding of e 150 in whisky?
Marie: Chill filtration is a useful tool for consistency of a product as long as it is done with care and that it is done within the warmest range practical to protect the flavour and the colour. Addition of caramel is done by companies again for consistency and used to be heavily for the US market.
Here at Highland Park we don’t need to do that because the quality of the casks we use gives us good natural colouration. Also consumers are definitely becoming more aware and savvy to the fact that light whisky does not necessarily mean bad/cheap/young whisky.

Martin: To be honest after so many years in the industry, I think we have learned that it’s all about the taste in the whisky, color or no color, filtered or non-filtered. That said, I do think that if a distillery have great cask that gives the natural color, then there’s no need for adding e150. When it comes to chill filtration. The whisky is cooled to between -10° and 4° C and passed through a fine filter. This is done mostly for cosmetic reasons – to remove cloudiness, rather than to improve or remove taste. We have done a lot of research on this matter. If you look at Highland Park we Chill filter our 12, 15 and 18. We do that because of the strength. If we going to change that in the future… maybe, but as it is now, we need to continue as it is, but a lot of HP is not chill filtered.

Have you tried any Swedish whisky? If so, what did you think of it?
Marie: Unfortunately no, I have not, although it is now on my list of things to do!

Martin: Yes, I have tried them all. Think there´s a lot of great things going on. I can see Box, Smogen and Hven taken the lead now when it comes to flavor and quality. My honest opinion when it comes to Swedish whisky is that especially the 2 distilleries mention here, do most things right. They have the right people to run, people with passion. What they have out now is not the best whisky in the world, but I’m, that someday they will get there. What people sometimes do when they compare Swedish and Scotch whisky is…..they take a Swedish malt at the age of 5-6 years and compare it to a 12 yo scotch and that is not fair. In Scotland whisky have been produce since 1494, in Sweden the last 10-15 years. So still a lot to learn, but I think they are doing great.

What is the proudest moment of your whisky career?
Marie: Other than landing the job here? Probably seeing some of the team who used to work with me smile as they collected their General Certificate in Distillation from the Institute of Brewing and Distilling.

Martin: There’s a lot. When I became a Keeper of the Quaich in 2009, but everytime people come over and tell me that my master class was great makes me proud. Most of all I’m just proud of having so many good friends in the best industry in the world.

What are your five favorite drams that you have not been involved in?
Marie: That’s a tricky one. It’s quite hard to say 5 favourites as I like trying different ones and I go through phases of what I like and then change again! I think I shall just try to pin 3!
I think I could claim the Balvenie Portwood as it is 21 years old and I was not with them that long! Don’t often get to drink it but it is truly awesome.
Glen Moray 16 year old is always worth coming back to after I have finished one of my phases.
Oban 14 year old is a really interesting one that I keep revisiting and being surprised by.

Martin: It’s a tough one. I think a distillery like Springbank always have great bottlings, I remember a 1966 that was so special that it still stands as one of the best for me. I love Mortlach 16yo, most Caperdonich is amazing. One of the best ever Ardbeg from 1972 bottled by Douglas Laing for Ardbeggedion. I truly love Laphroaig, as well. Within the last 25-26 years I have tasted so many good ones. I have found that some younger whiskies have surprised me positive and some older have been disappointing. I do have a week heart for Glenfiddich, and especially the 30yo, it’s amazing…..but my all-time favorite will be Highland Park 50 yo. And of the core range 21 yo.

Finally: Do you have any whisky advice for our readers?
Marie: There is a lot of talk about what people should and shouldn’t do and enjoy with whisky.
For me it’s about finding a whisky that you love and relate to, whether other people think it is cool or not, and don’t be afraid to try different things.

Martin: My advice to whisky drinkers. Drink responsible, be open minded, taste the whisky before judging it. Enjoy the whisky the way you want. There is no right or wrong, no rules when it comes to how you drink and enjoy whisky.
Go the whisky fairs, go to master classes, read books and don’t look at the points given by the writer. He might not like that particular style, but you might…..so start your whisky journey by being open minded. There is no such thing as a bad whisky, all some that are better.