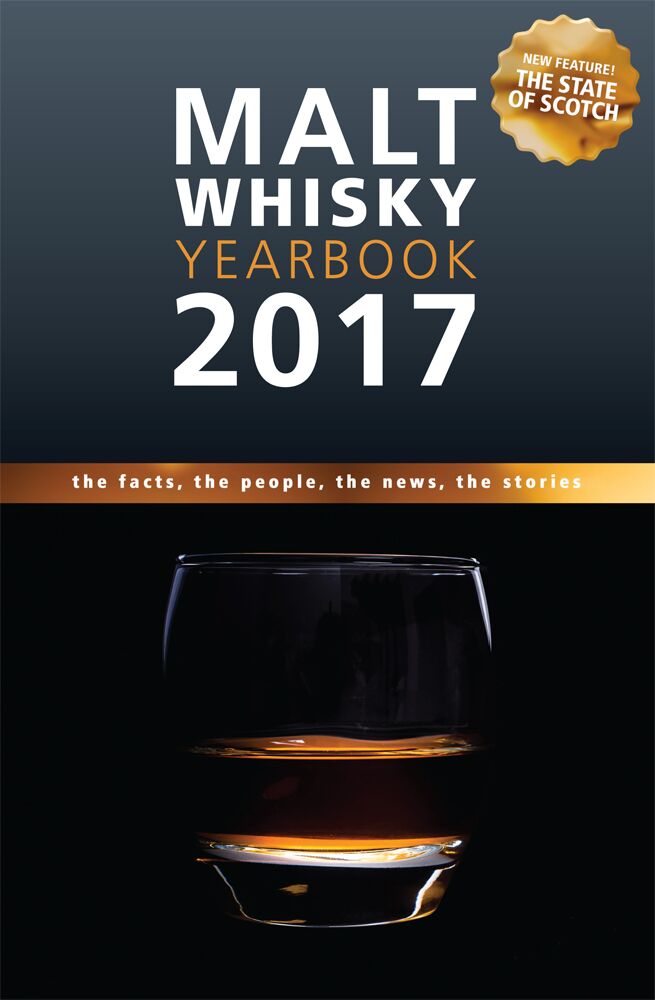 Malt Whisky Yearbook is updated and published once a year, and now it’s time for the 2017 edition. We contacted Ingvar Ronde, who is the author of this amazing whisky book about whisky and distilleries around the world. We wanted to hear his comments on the upcoming edition. The 2017 edition will be on the market october 1. You can order it here.

Hi Ingvar, please tell us what we can expect from the new Malt Whisky Yearbook.
You will, as always, get the most updated book on whisky that you could possibly find. That´s the whole idea. It should be a summary of everything that´s happened in the last year and also provide a glimpse into the future. You can read about new bottlings, new distilleries, new techniques, new markets, new trends and new companies. But I always make an effort to provide the historical connection as well. I´m a great fan of history (and not just whisky history) and knowing how everything started and has developed over the centuries makes, in my mind, enjoying whisky so much more rewarding. One new feature in the upcoming book is The State of Scotch, where I´ve asked some key personalities in the whisky industry to give us their view of where Scotch whisky is at the moment and where it´s heading.

How is the state of malt whisky now saleswise?
I would say the malt whisky category is in a healthy state at the moment. The latest figures from the SWA show that the values of Scotch whisky exports were down by 1% in the first six months of 2016 compared to the same period last year. Single malts on the other hand were up by 6% and this is a trend we´ve been seeing for the last couple of years. Blends are suffering while malts are gaining. In fact, since 2006, the single malts share of total Scotch whisky exports (also including bulk whisky) has gone from 7% to 10% but that´s just the volumes. If we look at values, they have increased from 16% to more than 25%. No wonder there are a lot of whisky producers in Scotland right now who are launching new malts from many of their anonymous distilleries instead of just pouring them into blends. There is a lot of money to be made from single malt Scotch these days.

Would you like to revel who the writers are that is featured in the 2017 edition?
Not a big secret there. I tend to use a team of the best known writers in the world but there is a new name this year – Becky Paskin – who´s one of the editors of scotchwhisky.com. Becky´s a brilliant writer and her article for this book deals with some of the whisky producers around the world, struggling to create a form of framework of rules or code of conduct how malt whisky should be produced in their region or country. Fascinating stuff. There are also articles about grain whisky, whisky pricing (the elephant in the room!), how different stills influence the spirit and lots more.

There are new distilleries starting up almost everywere nowadays. Which new distilleries are you extra exited about?
Yes, there are a lot of new distilleries popping up everywhere in the world right now. This time next year, we may even see a malt whisky distillery in Ethiopia! When I wrote the first edition of the Malt Whisky Yearbook back in 2005, the chapter about distilleries outside Scotland and Japan contained 33 distilleries. This year, that number has grown to 287. Some of these are exciting because they are run by people that are driven by curiosity yet at the same time they have a healthy respect for what malt whisky should be about – flavours. Westland in Seattle is one of my favourites with their experiments with new and local oak species. Box in Sweden is another example and I´m really happy that they are now entering into a wider market with new, exciting bottlings. Some Asian distilleries are also on the top of my list even though you wouldn´t really call them new anymore; Kavalan, Amrut and Paul John and then of course we have the Tasmanians with great whiskies coming out, although in small volumes. If I should mention one new Scottish distillery, it would probably be Inchdairnie in Fife. They have an exciting range of innovations and techniques on their agenda; mash filter, double condensers, a Lomond still, unique yeast recipes and they use winter barley as well. All this boils down to creating a more flavourful whisky.

What is in the glass on the cover for the 2017 edition?
I haven´t got a clue! Let´s pretend it´s a 75 year old Mortlach from Gordon & MacPhail.

Is there anything that has suprised you in the world of whisky since the last edition?
One thing continues to surprise me – why do so many whisky enthusiasts still dismiss blended whisky? Or vatted malts for that matter? There are so many great whiskies to be found in those two categories and, not least important, they are often affordable. And I would also like to see more whisky drinkers, especially in the northern part of Europe, experimenting with whisky cocktails – nothing fancy, just adding a mixer and some ice to their whisky to see what happens. Another thing I´m getting tired of is the obsession with age statements. We tend to focus on just one of the factors that (sometimes) determines the quality and the flavour of a whisky while at the same time disregarding other key elements – the barley, fermentation, distillation, the wood, the skill of the blenders etc. Having said that, I do understand the customer´s need for facts in order to make an informed choice when buying a bottle. That´s why I´m in favour of the transparency campaign initiated by Compass Box Whisky. If we have detailed information on just about anything else we eat or drink then why shouldn´t we have it on our whisky?

Finally: Is it still exiting to give out new editions and visit distilleries, as it was in the beginning?
Absolutely! I have been to so many distilleries and often three or four times, but every time I go there I learn something new. And to those of you who haven´t been on a distillery tour – nothing beats enjoying a dram on the site where it was produced, especially if you have the possibility of sampling it in the warehouse straight from the cask. But it´s not just that. It´s also about meeting the people making the whisky and taking in the entire environment and the landscape.